Following Starcom’s immersive session about the digital user experience at Nonference, Amy Kean shares her view on why brands need more empathy when it comes to digital advertising

Empathy is important. Some folk have it, some don’t, and sometimes you have to blindfold a room full of people for them to get it.

I’ve done a few weird things at IAB events. I built an AR app for IAB Engage for Mobile that delivered little animated mobile extras like dancing monkeys (relevant) during my presentation. Last year I partnered with Graffiti Life and Buzzfeed to psychoanalyse the attendees of IAB UK’s Nonference, then dragged them outside to turn their personality types into street art. This year I decided I wanted to talk about the digital user experience, because when it’s good, it’s wonderful, but when it’s bad, it stinks.

But first, the background. Last month (27th October) saw the anniversary of the first ever banner ad. “Have you ever clicked your mouse over here? YOU WILL” was the fascinating prediction made by AT&T some twenty-five years ago. I mean, it was an accurate prediction for circa 0.1% of all the people that click on display ads, but at least our CTAs have been consistent for the last two and a half decades. Whilst display is now an adult, digital marketers haven’t had it easy. There’s just so much stuff online, and so little space, and so many brands with aggressive short-term targets, that shouting and disrupting occasionally became a reliable tactic, in the hope that someone, somewhere will click. And of course, sometimes they do.

The sound, smell and taste of digital

But from a user perspective, that doesn’t always feel very nice. Unnecessarily intrusive ads are not a sustainable approach, and the UK is in the top five countries globally for adblocking. Our industry’s issue is that we don’t empathise enough, so (ironically) I decided to force it. We created an immersive-theatre style experience that used sound, touch, smell and even taste to show people first-hand how a crappy online experience feels, but also how wonderful it can be.

How? Well, digital audio is one of the most exciting things to happen to advertising.  Global Radio have an amazing piece of 3D sound technology called THE HEAD. It’s a microphone shaped like a head, and where you speak into it determines how the end user hears it. So, when we blindfolded the audience at Nonference, we also supplied headphones and took them on a 3D audio journey into the internet, Alice in Wonderland-style. You know, things like being interrupted while you’re reading something, the perils of clickbait, being followed by that goddamn jumper you once looked at on a Facebook carousel. The audience felt me breathing down their neck (literally) we gave them a shitty experience (literally… it was an ‘ass’ spray smell from a joke shop) and we left them with a bitter taste in their mouths (again, literally: concentrated bitter lemon juice). There were laughs, screams and a few gags, but they got the message.

Getting to the digital utopia

And here’s the best part: we also took them into a utopia of digital at its best. Where the social creative’s bespoke and great digital partnerships exist and you can click to buy with one day delivery through a simple yet suitable video ad. And it was lovely. As digital marketers we have a responsibility to put the user first: my call to arms is that we increase our empathy. If put an end to the ads that irritate, interrupt, and upset, we’ll be future-proofing the power of digital advertising. We have enough tools to understand what consumers want, so rather than the blind leading the blind, let’s lead by example, and make a positive online experience our focus. 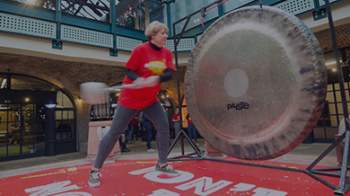 All the action from Tobacco Dock

IAB UK live from Tobacco Dock. Find out what went on.