The latest wave of the IAB UK’s Ad Blocking Report, conducted online by YouGov, reveals that 22% of British adults online are currently using ad blocking software – a rise from 18% in October.

Nearly two-thirds have been asked to turn blockers off

Nearly two-thirds (64%) of respondents who’ve downloaded the software have received a notice from a website asking them to turn off their ad blocker. Over half (54%) said, in certain situations, they would switch off their ad blocker if a website said it was the only way to access content – this rises to nearly three-quarters (73%) of 18-24 year olds. 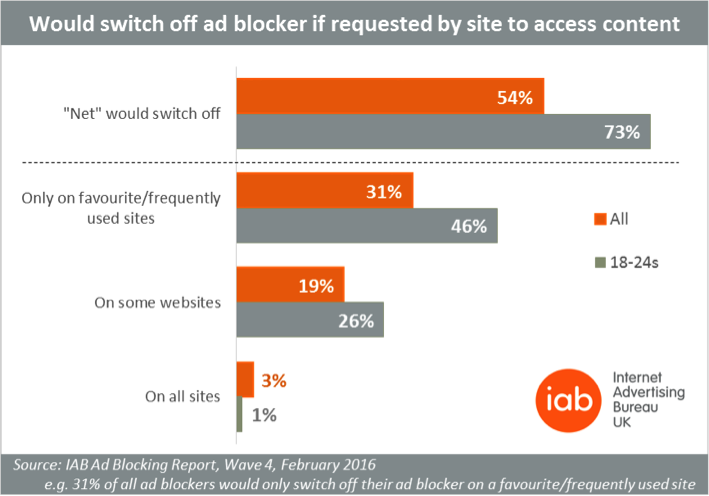 One fifth (20%) of people who’ve downloaded an ad blocker no longer use it: not being able to access content they want being the second most popular reason for doing this, after changing to a new device.

“The IAB believes that an ad funded internet is essential for providing revenue to publishers so they can continue to make their content, services and applications widely available at little, or no cost,” said IAB UK’s CEO, Guy Phillipson. “We believe ad blocking undermines this approach and could mean consumers have to pay for content they currently get for free.”

He continues: “Part of the solution to tackle ad blocking lies in making consumers more aware of the consequences, which seems like it’s starting to filter through. If they realise it means they can’t access content or that to do so requires paying for it, then they might stop using ad blockers. It requires reinforcing this “trade-off” message – ads help to fund the content they enjoy for free.”

The most common reason people would be less likely to block ads is if they didn’t interfere with what they were doing (cited by 45%), followed by having fewer ads on a page (29%) and if they were more relevant (12%).

Phillipson concludes: “As an industry we are committed to improving the user experience with the LEAN ads programme launched last October, which promotes a less invasive, lighter ad experience.”

Among those currently using ad blocking software, 72% are doing so on laptops, 41% on desktop PCs, compared to 26% on smartphones and 21% on tablets.