Welcome to Future Trends Volume 16 all about Virtual Reality (VR). Here we'll be discussing VR and what it could mean for us in the future.

According to Elon Musk we’re almost certainly living in a Virtual Reality based world as part of a computer simulation constructed by more advanced future generations. The IAB’s Future Trends Group doesn’t necessarily subscribe to that view, but we are pretty excited about the potential of Virtual Reality (VR).

Marcos Angelides from OMD argues that live music and festivals will be the most likely short-term application of VR and open up increasingly exclusive festivals and concerts to a wider audience at a fraction of the cost.

Dan Kent-Smith from LinkedIn looks back to the 1930’s to track the history of VR and thinks about how brands, and the market research industry, might take advantage of the emerging technology.

Finally, the IAB’s Bradley Moss, speculates about how VR will be a mainstream in our lives as the mobile phone is now and looks forward to a tour of Beijing before meeting friends in the pub.

Whatever the application of VR, it’s clear that we’re reaching a tipping point, with technology dropping in price, becoming more accessible and brands starting to experiment with getting the most from new immersive Virtual Reality experiences. How long before we’re talking about the ‘year of VR’? 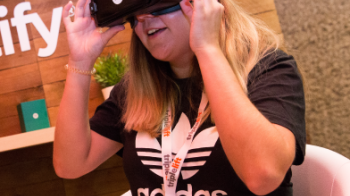