The decline of the TV centric living room

The degree to which the rise of internet-connected devices has impacted the traditional TV watching living room dynamic is revealed today by an in-depth study from the IAB UK exposing two key myths about this traditional routine.

The Real_Living study – carried out by award winning research agency, Sparkler – involved 1,050 people and was measured by a mixture of surveys, passive filming, on-device tracking, daily diaries and biometric data (via skin sensors to measure Electrical-Dermo Activity, aka engagement). The study also includes data from the National Grid and British Gas.

Only 50% of UK online adults now say the TV set is the focal point of their living room, whilst 70% report they ordinarily use a connected device whilst watching TV – this rises to 87% of 16-34s. Multi device activity peaks between 6-9pm.

During TV programmes, over one third (34%) check emails, 31% Instant Message or text and 25% shop online.

The biometric data revealed that about 60% of the time a person is most highly engaged during an evening TV session is in non-TV related activity, such as using a digital device or talking to someone.

“Second screening is ingrained to such a degree that all screens are now equal, there’s no hierarchy, only fragmentation of attention – actually switch-screening is a much more accurate term,” says Tim Elkington, the IAB’s Chief Strategy Officer. “Furthermore, entertainment is only a small part of the living room media activity. It’s now a multifunctional space where people jump between individual and group activities, be it shopping, social media, emails, work or messaging.”

The study revealed the traditional assumption that people cram non-TV related behaviour into the ad breaks is no longer valid.

For example, the incidence of checking emails is consistent during TV programmes and ad breaks (both 34%) whilst texting or Instant Messaging is only 1% higher during the ad break than the programme. The device tracking showed, overall, there was actually more online activity per minute during a programme than an ad break.

Furthermore, the declining “kettle power surge” during ad breaks in peak TV occasions over the last 25 years provides more evidence of the change in the traditional rhythm of the living room. During the biggest TV event in 1990 – England’s World Cup semi-final against West Germany – National Grid data compiled by British Gas shows a power surge equivalent to 1.12 million kettles boiling at the same time immediately after the match. In 2014’s biggest TV event – England’s World Cup match against Uruguay – the power surge was the equivalent of only 410,000 boiling kettles. 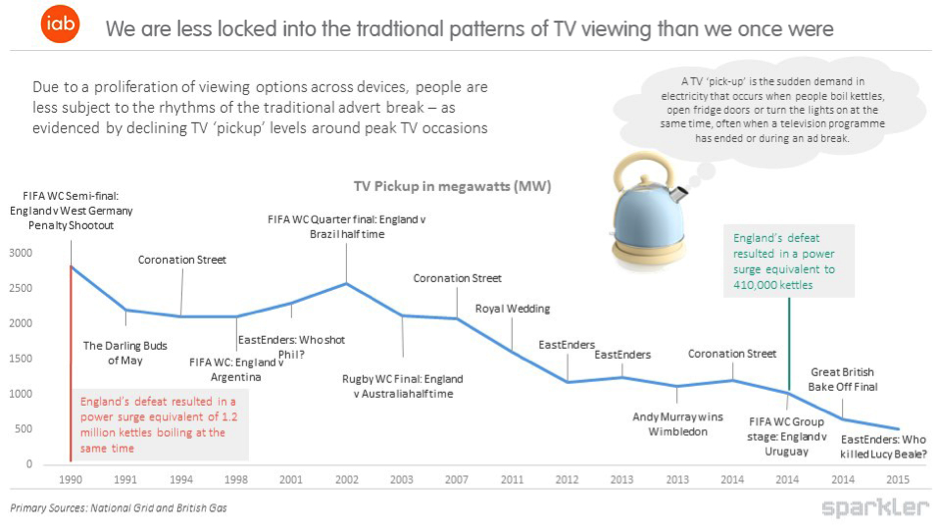 Elkington says: “Connected devices and the realities of modern life mean behaviour in the living room is no longer determined by TV programmes and ad breaks, it is determined by the natural rhythm of device usage.”

Among the various activities people do during an ad break, the one they do most often is going online via a connected device (35%) followed by talking to someone in the room (15%), leaving the room (13%) and changing the channel (8%). 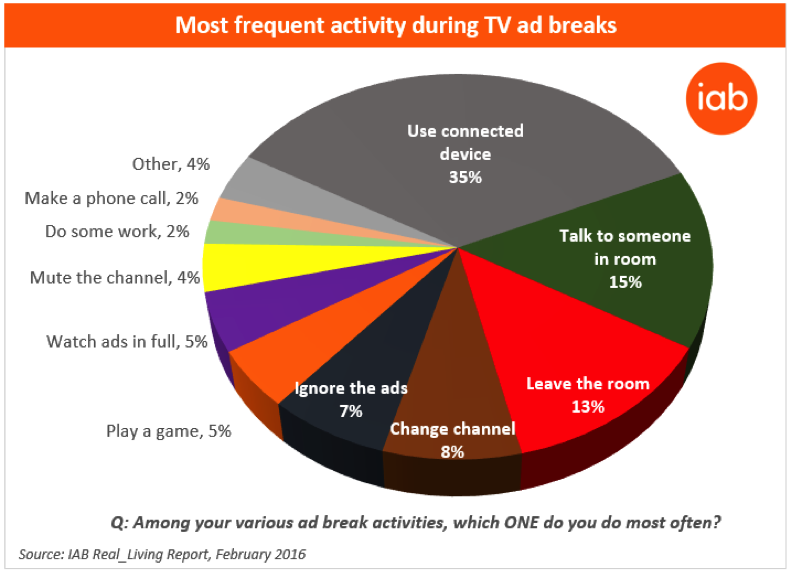 E.g. among the various activities people engage in during ads, using a connected device is the one done most often (cited by 35% of respondents)

“Connected devices have changed the living room and will continue to do so, and advertisers must plan for the living room of tomorrow,” concludes Elkington. “This requires a rethink about how to command attention in the living room because the opportunity to do so is far more limited, fragmented and competitive than ever before.” 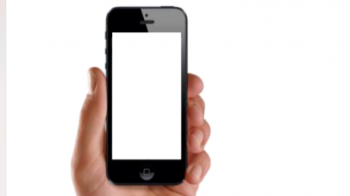 Real_Living: A focus on the data captured through passive digital activity monitoring 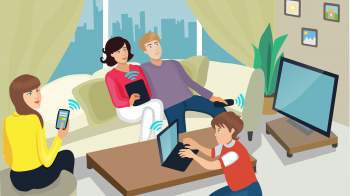 Real_Living: A focus on device usage and attitudes 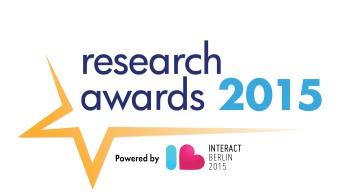 IAB UK won the ‘Consumer Devices’ award for its ‘Real_Living: How devices compete for attention in the living room’ research at the IAB Europe Research...