On Device Research and Celtra reveal that only a third of mobile ads adhere to creative best practice.

S4M, a mobile ad tech platform, conducted an extensive study on 92 mobile programmatic campaigns between July 2016 and February 2017 in the US, Europe, and APAC.

Sponsored by Celtra, the Creative Management Platform for digital advertising, the guidelines were established through an in-depth analysis of the top 20% of mobile ads in terms of both ad recall and purchase intent.  The research found that top performing ads adhere to at least six of these principles.

As the Andreesen Horowitz analyst Benedict Evans reminded us only a couple of months ago, mobile is eating the world with the 2.5 billion people who now own a smartphone representing an unprecedented pace of tech adoption. Where consumers go, so too do the ad pounds which is why we have seen almost exponential growth in mobile ad spend in UK with mobile display reaching £800m in the first half of 2016 according to the IAB.

Why therefore are so many brands still not getting mobile right? According to a study by Celtra and Forrester released last year, 71% of us say that at least half the ads we see every day disrupt our mobile experience, and it’s not even as if this disruption is creating particularly memorable brand experiences. As the chart below shows, an analysis of On Device Research’s ad effectiveness database reveals that the top performing 20% of mobile ads on average result in an improvement in online ad recall that is over six times higher than the rest of the pack. In other words, it’s only a minority of mobile ads that are truly memorable: 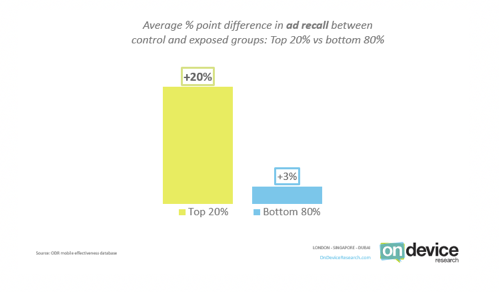 When it comes to campaign planning, audience targeting, delivery and optimization, mobile offers an abundance of opportunity the likes of which no other platform has ever seen. But planning and execution are only part of what makes a great mobile campaign. The key question remains: what is it that the top 20% of mobile ads are doing creatively that most other mobile ads aren’t? The answer lies in the following ten creative best practice guidelines and it should be noted that the top performing campaigns on average adhere to six of them:

1) Logo presence on every frame is crucial: It may sound obvious, but there are plenty of mobile ads that leave you guessing who the advertiser is until the last minute – and by then many consumers have moved on.

3) Product shots catch the eye: 91% of top performing ads contain a product shot. If you want consumers to invest in your brand, show them what you want them to invest in.

4) Placing branding at the top of the creative boosts ad recall: If you want your ad to be memorable, place your brand logo at the point where a consumer’s eye is most likely to be drawn to first.

5) Be cautious with dual branding as it can distract and confuse: The retail sector is particularly guilty of this, displaying both retailer and product logos at once. Double the amount of worst performing ads contain dual branding versus the top performers.

6) A clarity of message is key: Aim for cut-through, not clutter. A single clear message will nearly always beat a text heavyad overloaded with information.

7) Video grabs the user’s attention. Again, an obvious one, but the richer the media, the more eye catching it is and video ads are no exception.

8) Inject a little humour to your creative: Humour may be subjective, but over a quarter of the best performing ads were at least attempting to be humorous vs just 6% of the worst performing.

9) A bit of interactivity holds the user’s attention: The personal and tactile nature of our relationship with our smartphones affords a whole host of interactive ad opportunities, but brands must be careful not to irritate.

10) If you want to drive purchase, then unsurprisingly having a strong call to action helps.  It’s amazing how many ads don’t tell consumers how to actually fulfil a purchase!

When applied to ODR’s entire database it was discovered that two-thirds of mobile ads tested adhere to fewer than six of these guidelines. Most mobile ads are therefore not being given the best chance of maximising their impact on brand metrics.

Clearly, all mobile ads have not been created equal, but by following these ten guidelines, they’ll at least have a fighting chance.