Alright stop, collaborate and listen. IAB is back with a brand-new mission.

And that mission is to build a sustainable future for digital advertising.

The IAB formed two decades ago, at the onset of digital advertising when the focus was on search and simple banner ads, before Google registered its domain and mobile phones still had antennas.

As the new kid on the block, our mission was to spread awareness and grow digital advertising. Clearly a lot has changed since then, and this year, digital accounted for more than 50 percent of all ad spend in the UK. But as anyone working in this space knows, it's not about the latest tech and being en vogue; digital suffered its fair share of growing pains.

In 2018, the IAB will officially enter adulthood as we turn the big 2-1. While we've made some great strides in addressing the challenges, there's still work to be done. And this brings me back to the oath. We must stop working in silos, walled gardens or any other industry-coined term that isolates all the different bits of our ecosystem. It's time to get in sync, move in one direction, one for all and all for one.

I think it's human nature to focus on short-term goals and outputs. But if you look at the most successful companies over the last 20 years, part of their success lies within their ability not to worry about (just) short-term profit but building toward a long-term plan. Companies like Facebook, Google, Apple and Amazon are obsessed with getting things right in the long term and testing new ways of wowing consumers. We're not all saints though; most of our industry – and other industries in general – are primarily fixated on making as much money as possible in the now, which doesn't help anyone win in the long run.

At a time when everything in our society is divided, it's important we utilise our position as a non-biased trade body to bring people together to achieve things they can't do on their own. The Gold Standard is the epitome of collaboration; if we can get the whole industry to take that idea of committing to raising standards of digital advertising together, then we'll win together.

I'll also bring my Ice Ice Baby oath to life at the IAB through teamwork and fostering cooperation internally to best engage everyone in advancing the digital industry. We'll do this in an open and collaborative way of working, building project teams comprised of different people from different departments. This will not only help us stay on the forefront of industry developments but also expose each IABeer to new ways of working.

So, if there's one thing to take away from my oath just remember: if there's a problem, the IAB will solve it...through collaboration. 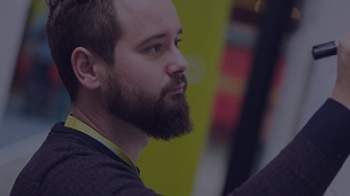 Trends suggest native advertising will make up a whopping 52% of all display ad spend in Europe by 2020 according to Enders research specially...