Marcos Angelides, Strategy and Innovation Director at OMD looks at the future of social media.

When I was 14 I had a birthday party at home.

I say ‘birthday party’, it was really 6 teenagers hanging out in a bedroom, playing music and being moody.

It was all going well until we went downstairs for something to eat… and somehow, in that short period, my mum unearthed the family album.

She’d done it with the best intentions, in her eyes these photos were a source of pride and love. Every naked baby picture was a cherished memory.

But for 14-year-old me, it was the most embarrassing moment of my life.

Social media it seems is facing the same challenge.

For the past 10 years, we’ve used platforms like Facebook to connect with our friends and record our memories.

First in text and then in photos. Every major life stage has been captured. From birthdays and holidays to weddings and births.

That final life stage may well be the most important – at least when it comes to what we post.

On average parents share over 1,000 photos of their child before they reach the age of 5.

The problem is, during these past 10 years the kids grew up.

Many are now teenagers. Teenagers who are busy creating their own identities and friendships.

Teenagers who don’t want to be reminded of embarrassing photos.

As a result, the current crop of social platforms are starting to feel like a digital family album – and who wants to hang out there?

Having grown up in a world of public sharing, the younger generation are craving greater control over what can be seen and shared.

And consequently, teenagers are moving onto new and private environments in an attempt to escape their parents.

This is the real reason for Snapchat's meteoric rise. It offers the greatest level of privacy for teen audiences. 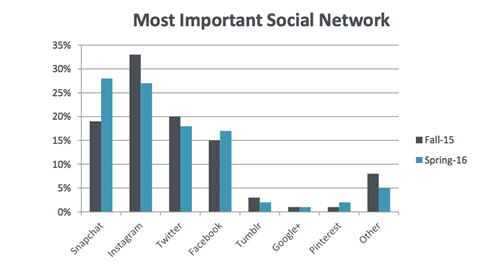 It’s important to say however, there’s nothing odd or worrying about this behaviour.

It’s no different to hanging out with friends in your bedroom rather than the living room.

But in terms of digital usage, it will lead to a significant divide between the generations.

Between those of us who enjoy the public stage of Facebook and Twitter, to those who prefer the private sanctity of Snapchat and Whatsapp.

Which leads us to the new role of brands.

The good old days of social where you posted a message on one or two platforms are over.

Now more than ever brands need to understand the various platforms out there and how different audiences gravitate to each one.

They’ll also need to say goodbye to the term ‘engagement’.

Engagement by its very nature is a public behaviour – the output of a mass reaching campaign.

As profiles become more private it will change how people interact with brands.
Sharing one piece of content, to everyone, on every channel will no longer work.

Conversations will be in small groups rather than global communities.

Privacy will become as important to people as publicity.

And that’s how you’ll spot the most successful brands; talking with teenagers, respecting their privacy – and keeping the family photos far from view.