John Lewis' 2017 Christmas ad is another masterclass in marketing, with a largely positive reaction to #MoztheMonster.

The launch of the John Lewis Christmas advert has become a key festive date as important as the start of advent to many, as has the overwhelmingly positive social media reaction to whatever the store decides to do for its annual campaign.

#MoztheMonster - owner of his very own trending hashtag - is the star of this year's campaign, along with the obligatory cute child and the now-traditional classic song covered by a modern artist, this year featuring Elbow's rendition of The Beatles' Golden Slumbers.

These ingredients appear to be a winning formula for the British department store, as just several hours after the ad's premiere, more than one-third (37 per cent) of all tweets about it were positive, with 36,000 mentions already amassed, according to data from analytics company Meltwater.

However, it is likely that the number of positive tweets was in fact even higher, as the system used by Meltwater ranks 'cry' as a negative word, and many will have tweeted about how emotionally effective the advert was, the Independent reports.

And in another now-festive tradition, the unfortunate owner of the @johnlewis Twitter handle did his best to react to his usual barrage of comments, helpfully redirecting users towards the actual store @johnlewisretail. 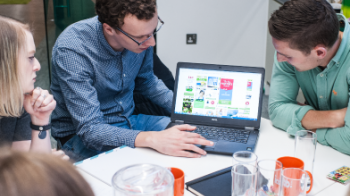