Piccadilly Circus screens to switch off

The billboards will be off from January until the autumn.

Piccadilly Circus is set to get a revamp in 2017, which will see its billboards switched off for the longest period of time since World War Two.

Apart from power cuts and special occasions, the famous lights haven't been switched off since 1949, but the renovation work will see them go off for almost a year.

Instead of the usual ads we see on the billboards, a static advertising banner featuring signed brands will replace the lights for the majority of the year. The owners of the site, Land Securities, then plans to replace the six billboards with one large, ultra-high definition curved screen.

Unsurprisingly, Coca-Cola is set to continue its 62-year residency on the display. Marketing director for Coca-Cola Great Britain and Ireland Aedamar Howlett said: "There are only a handful of advertising spaces in the world that are as iconic and unique as the Piccadilly Lights." 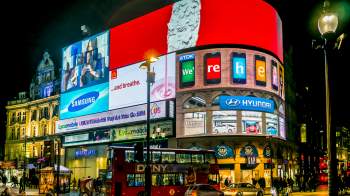 The digital billboards at Piccadilly Circus have been embedded with AI that can recognise and target ads to specific cars ahead of them being illuminated...